Antwerp/Brussels/Vilvoorde, 7 March 2018 – Telenet Group Holding NV (Euronext: TNET) has today entered into an agreement with the two other shareholders of De Vijver Media NV (hereinafter De Vijver Media or “the Company”) to fully acquire De Vijver Media. Shareholders Mediahuis NV and Wouter Vandenhaute and Erik Watté (Waterman & Waterman NV) will sell their respective stakes of 30 and 20 percent to Telenet, who will thereby become the sole shareholder. The acquisition price was not disclosed. As the owner of three broadcasters and a production house, Telenet will be able to respond even more and even faster to innovations in the field of viewing experience or advertising. Simultaneously with this transaction, through a 50/50 joint venture, SBS Belgium and Mediahuis are setting up a sales office that will provide commercial partners with online video solutions and cross-media options. The transactions are now being notified to the competent competition authorities for approval.

The rapidly evolving media landscape and the challenges that this entails has ensured that all the partners within De Vijver Media were aware of the need to closely review and reshape the existing partnership in recent months. The viewing behavior of the consumer is changing, and channels have to compete with global content providers such as Netflix or Amazon.  These players make massive investments in new series and films, and in the technology platforms to make them available, and have set the bar for the production and provision of both international and national content very high. In addition, linear television channels are seeing a shift from television advertising to online advertising, where global players like Google and Facebook are calling the shots.

All these changes have an impact on the business model of the traditional television providers. Telenet’s ambition is to further strengthen the local ecosystem, together with partners, so that the viewer can continue to enjoy strong local content and innovations in the entertainment field.

In order to be able to implement its investment strategy and to respond faster to changes in the television market, Telenet intends to acquire all the shares of De Vijver Media.  Through this transaction, Telenet will be able to work seamlessly together with De Vijver Media on new ways to provide end-users with more programs on a broader range of formats, and thereby remain an important partner of advertisers.

John Porter, CEO Telenet: “We are pleased to be able to take this next step in our ‘connected entertainment’ strategy. As the owner of a production house with strong local roots and a number of thriving commercial channels, Telenet can speed up the realization of new viewing experiences, and respond to the new ways in which media are consumed. At the same time, this will permit us to focus even more and even faster on innovation. It is thereby still our ambition to work together with all the players in the Belgian television and entertainment sector, and to ensure that the viewer can continue to enjoy top local content. In addition, I am also pleased that Wouter Vandenhaute will continue in his role as Chairman of the Board of Directors of De Vijver Media, and use his extensive experience to help guarantee continuity.”

Gert Ysebaert, CEO Mediahuis: “Mediahuis has experienced rapid growth in recent years, and has developed into a multimedia group. As the largest publisher in Belgium and the second largest publisher in the Netherlands, we have strong ambitions for the further digital expansion of our activities. The sale of the 30% stake in De Vijver Media should therefore also be seen as a clear decision to focus on the further strengthening of our Belgian-Dutch organization in the coming years, combined with the digital development of our media and services. In line with this digital strategy, the enhanced partnership with SBS will enable us to further strengthen our position within the rapidly evolving online video market, and to offer advertisers high-impact cross-media options. At the same time, we are convinced that Telenet is the most appropriate party to give SBS additional impact within the challenging and quickly evolving television landscape.”

Wouter Vandenhaute: “Telenet is becoming the full owner of De Vijver Media at exactly the moment at which both the company and the Flemish media landscape find themselves at a crossroads. Five years after the launch of VIER, SBS has consolidated its place as the third local player, along with VRT and MEDIALAAN. Woestijnvis has been extensively rejuvenated, but, after 20 years, still remains the reference among the Flemish production houses. The dynamics between Public Broadcasting and two local commercial players over the past years ensure top television content for the Flemish viewer on a daily basis, and provide great opportunities for creative minds. At the same time, the audiovisual sector is facing challenges, partly because of the rapidly changing viewing behavior. The full acquisition of De Vijver Media by Telenet is the best guarantee for a successful future. Telenet has the resources and the knowhow to guide SBS and Woestijnvis through this changing landscape. Local content is the motive and the essential purpose of De Vijver Media, which also happens to be the reason Telenet entered this scene three years ago. The fact that Telenet is now increasing its stake to 100 percent is an indication of its appreciation, and a recognition of the performance of the past years. For me personally, as a shareholder, I have mixed feelings about having to let go of the dream we started with in early ‘97. It is goodbye, but not a farewell, because I want to continue to play a part in this new story.”

Telenet emphasizes that the acquisition of De Vijver Media will not lead to a change in the agreements that were entered into with other television providers today. The transaction will be submitted to the competent competition authorities.

Mediahuis and SBS are forming a joint venture for the provision of online video and cross-media campaigns.

In addition, Mediahuis and SBS Belgium have decided to further strengthen their existing cooperation in the field of online video advertising and cross-media campaigns. Both partners will join forces and, together, are setting up a national advertising sales office via a 50/50 joint venture.  This joint sales office will focus on the marketing of the online video activities of both Mediahuis and SBS on the one hand, and will provide advertisers with a strong response to their demand for innovative and high-impact cross-media campaigns on the other.

Initially, the new sales office will provide the online video propositions for the entertainment brands of SBS (VIER and VIJF) and the news brands of Mediahuis (De Standaard, Het Nieuwsblad, Gazet van Antwerpen and Het Belang van Limburg).  In line with the vision of both partners, the sales office will have an ‘open’ character, and will not be averse to partnerships with third parties.

Subject to approval by the competent competition authorities, the new sales office will initially consist of ten employees from Mediahuis, SBS and The Pool. The management of the sales office will be in the hands of a managing director, who will report to the Board of Directors of the new joint venture.

Annex - Current structure of De Vijver Media. After approval by the competent competition authorities, Telenet would acquire 100% of the shares.

About Telenet - As a provider of entertainment and telecommunication services in Belgium, Telenet Group is always on the lookout to offer its customers the perfect experience in the digital world. Under the Telenet brand, the company focuses on offering digital television, high-speed Internet and fixed and mobile telephony services to residential customers in Flanders and Brussels. The company provides mobile telephony in Belgium under the brand name BASE.

The Telenet Business department provides the business market in Belgium and Luxembourg with connectivity, hosting and security solutions. More than 3,000 employees are working towards a single goal: making living and working simpler and happier.

Telenet Group is a part of Telenet Group Holding nv, and is listed on Euronext Brussels under the ticker symbol TNET. Surf to www.telenet.be for more information. Telenet is 57% owned by Liberty Global, the largest international TV and broadband Internet company in the world. Liberty Global invests and innovates, and, in this way, offers people the opportunity to get the most out of the digital revolution – and this in more than 12 countries across Europe.

About Mediahuis - Mediahuis is one of the leading media groups in Belgium and the Netherlands. More than 3,200 employees achieve an annual turnover of € 800 million, and a total daily sales figure of 1,4 million newspapers. With news brands such as De Standaard, Het Nieuwsblad/De Gentenaar, Gazet van Antwerpen and Het Belang van Limburg, Mediahuis sells approximately 516,000 newspapers in Belgium on a daily basis. In the Netherlands, the group operates, among others, the news brands De Limburger, NRC Handelsblad, nrc.next, De Telegraaf and Noordhollands Dagblad, and achieves the sale of nearly 900,000 newspapers every day. Mediahuis also operates a number of significant classifieds platforms in Belgium and the Netherlands, such as Jobat, Jellow, Hebbes, Zimmo, Vroom, Gaspedaal and GroupDeal. As a publisher, Mediahuis unreservedly believes in independent journalism, as well as in strong and relevant media that make a positive contribution to people and society. Based on this vision, the company continuously invests in its strong news brands, both on paper and digitally.

About SBS Belgium - SBS Belgium is the mother house of the television channels VIER, VIJF and ZES. The three channels have become stronger than ever in the current media landscape. In addition, SBS Belgium also acts as sales office for the Discovery, TLC, njam! and Play Sports channels. Together, VIER, VIJF and ZES achieved a market share of 19.2 percent in 2017. This is precisely what the advertisers want from the channels: a reliable, stable reach. As a result, SBS keeps both Medialaan and VRT on their toes. That is also an excellent way to ensure that television – be it analog or digital – remains an exciting medium.

As Flanders’ largest channel for women, VIJF broadcasts unpretentious, feel-good TV with a quirky flair for young, active women - and with success. ZES pampers the viewer around the clock with the hottest American films and series: ranging from the major classics and Hollywood blockbusters up to the most wanted top series. VIER aims to achieve an increasing number of fixed appointments with the viewers. Gert Late Night, for example, is a surprising talk show that is aired late in the evening, which is exactly what Flanders has been waiting for. With Sports Late Night, VIER is the late-evening market leader on Fridays, Saturdays and Sundays. Starting this fall, we are also aiming for live reach during prime time with Champions League matches. VIER will also focus on the weekend, including with its own version of the most successful dance competition in the world, Dancing with the Stars, a daring, glossy TV format in which Flemish celebrities bundle their energy with professional dance partners. 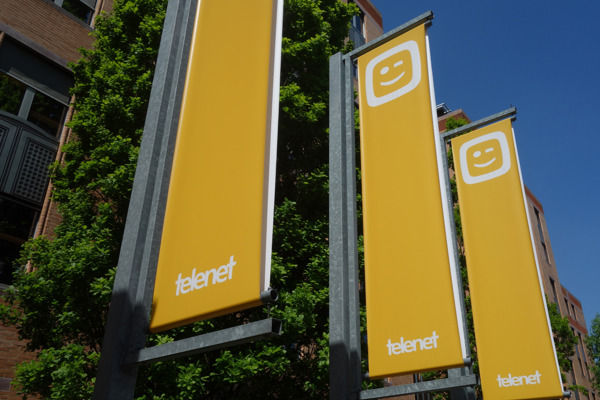