The enclosed information constitutes regulated information as defined in the Royal Decree of 14 November 2007 regarding the duties of issuers of financial instruments which have been admitted for trading on a regulated market.

FY 2017 revenue(2) of €2,528.1 million (+4% yoy) driven by the BASE and SFR Belux acquisitions and the sale of Ortel. Our rebased(1) FY 2017 revenue was up 1% with an increased contribution from our wholesale business, higher cable subscription and B2B revenue being partially offset by lower mobile telephony revenue, the impact from regulatory headwinds and lower handset-related revenue. Q4 2017 revenue of €643.8 million, up 2% yoy on a reported basis, including a full quarter contribution from SFR Belux, and up 1% on a rebased basis.

Modestly improved net subscriber trend for our advanced fixed services of enhanced video, broadband internet and fixed-line telephony on a sequential basis in Q4 2017 despite a continued intensely competitive environment and a tough promotional quarter, driven by our attractive year-end marketing campaigns and promotions.

Robust net postpaid subscriber growth in Q4 2017 (+43,800) thanks to "WIGO" and accelerated demand for BASE's new postpaid portfolio with postpaid now representing around 82% of our active mobile customer base.

Net profit of €113.8 million for FY 2017 versus €41.6 million in 2016. Net profit for FY 2017 was driven by (i) the increase in Adjusted EBITDA, as discussed below, (ii) a €245.5 million non-cash foreign exchange gain on our USD-denominated debt, (iii) a €243.0 million non-cash loss on our derivatives (iv) a €76.0 million loss on the extinguishment of debt following certain refinancings and (v) the aforementioned accelerated onboarding of our Full MVNO customer base having resulted in a €29.2 million restructuring charge in Q3 2017.

For 2018, we target healthy financial growth with rebased Adjusted EBITDA(a) growth of 7-8% leading to an improved rebased Adjusted EBITDA(a) CAGR of 6-7% over the 2015-2018 period versus 5-7% initially. Against stable rebased revenue growth, we expect our accrued capital expenditures to represent around 26% of our revenue in 2018, leading to robust Adjusted Free Cash Flow(b) of €400.0-420.0 million for 2018.

(b) A reconciliation of our Adjusted Free Cash Flow guidance for 2018 to a EU IFRS measure is not provided as not all elements of the reconciliation are projected as part of our forecasting process, as certain items may vary significantly from one period to another. 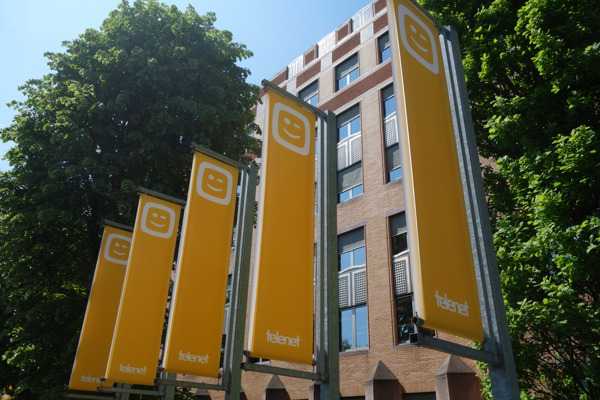 Telenet Group is part of Telenet Group Holding NV and is quoted on Euronext Brussel under ticker symbol TNET. For more information, visit www.telenet.be. Liberty Global - one of the world’s leading converged video, broadband and communications companies, innovating and empowering people in six countries across Europe to make the most of the digital revolution – owns a direct stake of 57.3% in Telenet Group Holding SA/NV (excluding any treasury shares held by the latter from time to time).